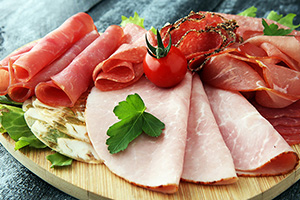 A recent report by Action on Salt has revealed that 25% of chilled sliced meat products sold within the UK are saltier than Atlantic Sea water.

The research was conducted by Queen Mary University of London and took into consideration sliced meats sold in leading grocery stores. These meats included household favourites such as ham, chicken, salami, and corned beef.

1 in 3 of these meats failed to meet the national salt reduction targets and were considered dangerously high in salt.

Action on Salt have criticised efforts made by manufacturers and food companies, expressing that not enough has been done to reduce the levels of salt in food. Even after the salt targets were set in 2006.

Considering all products reviewed in the research, the salt content varied between 0.26g and 6g per 100g, showing a huge difference between product ranges. The levels averaged at around 2.1% per 100g, taking up 65% of the range selected. Only four products were considered as low salt content.

“Why are these everyday sliced meats, which are frequently consumed by children, so high in salt when it is clearly not required for taste or food safety? Whilst some salt may be needed in processed meat, there is scope for extensive reductions, as demonstrated by some of the more responsible companies.

There’s no excuse. Other manufacturers must now follow their lead and put their customer’s health first.”

Sodium Reduction Targets can be met

Even the most challenging of applications can achieve a successful reduction in sodium with a simple switch, including in charcuterie meats such as prosciutto and chorizo.

Graham MacGregor, Professor of Cardiovascular Medicine at Queen Mary University of London, and Chairman of Action on Salt, said:

“Reducing salt is the most cost-effective measure to lower blood pressure and reduce the number of people suffering from strokes and heart disease and life changing disabilities associated with this – all of which is completely avoidable. It’s a disgrace that food companies continue to fill our food with so much salt when there is the option to reformulate, which our research shows can easily be done. The Government needs to force the industry to comply, to ensure that many thousands of people don’t die unnecessarily.”

Sodium replacement technology such as Smart Salt® is key to successful reformulation. It offers a 1:1 replacement for regular salt and offers the same taste and functionality. In some applications it can also extend shelf life because of the magnesium ions in Smart Salt® slowing microbiological growth.

Simply replace your regular salt for the same quantity of Smart Salt® and achieve up to 60% reduction in sodium levels. Research even shows that some find the taste profile even more flavoursome with Smart Salt®.

If you are ready to investigate options regarding sodium reduction, talk to the team today on info@brusco.co.uk or 01386 761 555 for a sample of Smart Salt®. See first-hand how it can help improve the nutritional profile of your product.

Quality – be the best we can be; be informed and educated, identify and appropriately manage the risks, instil the importance of quality on our partners.

Innovation – always be curious; constantly hunt for new ideas and trends and share insight and ideas with our customers

Integrity – treat others as you wish to be treated; open, honest and fair relationships with our customers and suppliers